A short run to Weedon Bec

First task of the day – Brenda tried the new shower mixer tap that I’d fitted. She reckons that it’s wonderful! Instant hot water, no fighting with a stiff tap that needed a zillion turns and was such a large diameter that her hand could only just grasp it. 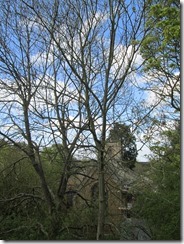 She now wishes that she’s broken the old one ages ago.

After a peaceful night opposite Bugbrooke marina, we set off in the sunshine and pootled along past Nether Heyford and Stowehill until we moored on the church moorings at Weedon Bec – Jannock’s home until next weekend.

I went and fetched the car whilst Brenda prepared lunch. On my return we ate, washed up and headed home. A short day, I know, but a relatively safe place to leave a boat un-attended.