About one hour of today’s two hour trip was spent tied up above a padlocked Marsworth top lock whilst the bottom pound, where the Aylesbury arm goes off, was rewatered. The CaRT staff believed that both lock 38 and Marsworth No1 lock had their top gates left open all night and junction pound was almost emptied with boats sitting on the bottom. We hope that those boaters we have seen holding onto 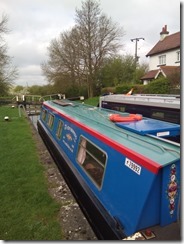 the ‘tradition’ of leaving the exit gates open when they leave the lock were amongst those inconvenienced today.

Once the padlock was removed, we shared the flight with a crew of hirers who have fallen in love with canal boating in just two days flat – just as well it hasn’t rained at all ;^)

We moored above the bottom lock, just along from ‘Engagement bend’, and left Jannock there for a week. There were plans to restrict mooring at Marsworth but I’ve not seen any new signs indicating the changes yet.