It was up and at ‘em this morning – Brrrr!  yup it’s Autumn. An early start was 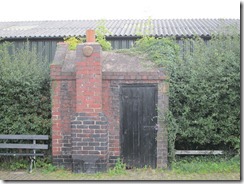 required to get through the lock flight before the rain that was expected to arrive approx midday. Consequently, two very soggy boaters had completed the locks and were happy to pull over to get out of the rain at 11:30. We passed this old lock keepers refuge near the Dog and Doublett. Our progress had been very slow as we were following a single hander – accident – waiting – to – happen. A 73 year old New Zealander who has been out for two weeks 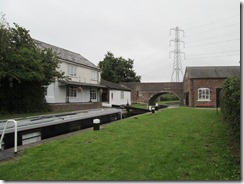 in his newly aquired boat having decided to live the boating lifestyle. Are Timothy, Pru and John Sergeant shown in the antipides? The chap admitted being deaf and having eyesight problems; he was certainly of bent back and hobbling gait, but that could have been brought on by two weeks of solo locking. If NZ doesn’t have a reciprocal health agreement with the NHS I hope he’s got good health insurance. 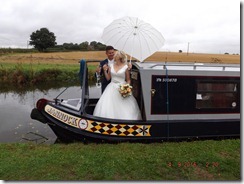 After we had sat out the rain, doing jobs like re-installing all the double glazing panels, G decided to set off again as it had finally stopped raining by 2pm. As we approached the Cuttle Bridge Inn, which had been dis-used and closed when we did the Explorer cruise 7 years ago, we could see wedding photos being taken on top of the bridge next to the Inn. A waitress rushed along the towpath towards us, tasked with asking us if we 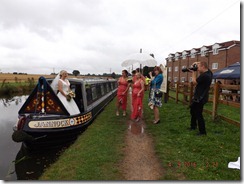 would mind stopping to be part of the background for the wedding pictures. After an engagement aboard at Tring reservoir, how could we refuse. We pulled in and the Bride and Groom stepped aboard for their photos to be taken. The bridesmaids all stood alongside. The smiles were because the rain had finally stopped.

It turns out that the groom is an airman based at RAF Benson. When we mentioned visiting there last week for families day he said that they had missed it because they were moving into their married quarter that day. That must have been 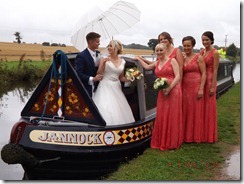 the removals lorry we saw as we made our way to the car park then. Mega coincidence then, we have the Groom’s permission to publish photos on the internet. We hope he returns from his tour of Afghanistan safely. We were waved off with a bottle of vin du Nuptuals in our hands and continued our journey towards Salford Junction.

At Troutpool bridge, just after the big warehouse that straddles the canal, we did another thing that we could never have predicted would happen. Hop Picking! G spotted a whole hedge of hops so we pulled 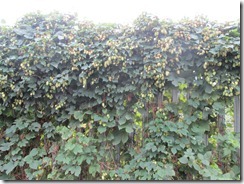 over and tested them – Yes they were proper hops with a flavour similar to Fuggles.We then harvested loads. (700gms wet) so should be enough for a couple of brews. They will be dried in a pillow case in the engine bay until we get home when they’ll be finished in the airing cupboard. He says he’ll call the beer Troutpool.

On to Salford junction where he then 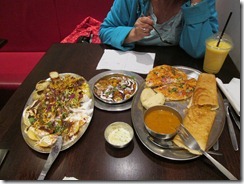 reversed Jannock back up the Grand Union to the mooring pontoons at Star City. This location has been recommended by Brian and Diana on Harnser so we thought we’d try it. G also remembered that they had mentioned an Indian street food establishment inside Star City so we went and tried that as well. It may all be vegetarian food but we had enough to bloat us with drinks as well for £22. What an excellent find. Thanks B&D!