We arrived at Jannock Thursday evening ready for a three day weekend on the Ashby. 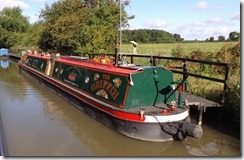 We left Sutton Lane bridge at 9am and continued North towards Snarestone. At Sutton Wharf we spotted Griffin moored on the visitor moorings, a long way from home (like us) as they moor at Cowroast. 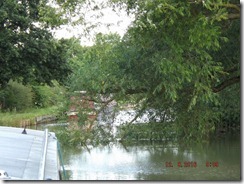 A bit further on we had our first encounter with the fallen tree. This has obviously fallen recently and some kind soul has removed the top to allow the passage of boats between it and the bank. Unfortunately it is very shallow at this point and even Jannock started dragging the bottom. At Bridge 40 the WRGies are having a summer camp, repairing a bridge, all doing clever and technical stuff in the 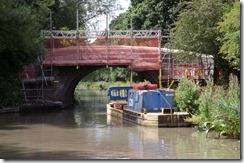 sunshine, having had a lovely week weatherwise. A WRGies week with no wind or sleet involved – well done folks.

Once past Shackerstone, we tied up for a siesta in the shade of bankside trees. Once G had sat quiet for a short while he then set to cleaning the starboard side of Jannock. Having finished that task we then continued on through wonderful countryside, in lovely weather, through Snarestone tunnel and into the last full length winding hole on the canal. If you are 50foot or less you can continue on down the 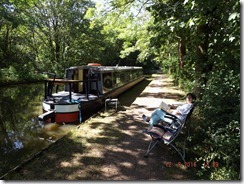 new stretch and turn at the very end. We pulled onto the services wharf and Graham filled Jannock’s water tank whilst Brenda mooched in the jumble sale disguised as . . .  a jumble shop. Treasures bought and farm made icecreams stashed in the freezer compartment for our supper we turned Jannock and headed south again to moor in the cutting immediately before the north end of the tunnel. 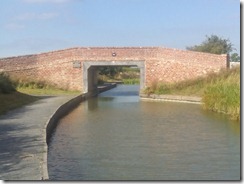 built since we visited last year. As we approached the bridge site we spotted a very large terrapin, about the size of a dinner plate, basking at the surface but it disappeared before I got chance to get a picture. 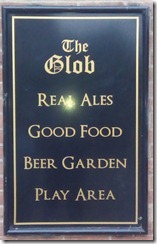 After dinner (followed by icecream – a rare treat on Jannock) we ambled up to Snarestone, saw the tail lights of a traction engine disappearing down the hill that we’d heard but not seen from the canal, paid a visit to the lovely St Bartholomews Church. Then up into the village where the history of it being wealthy in days of yore was made plain by some fabulous old houses.

Then into the pub and a selection of draught, sorry Daft spellings. We presume ‘The Glob’ is a joke but the advertising of their summer music event is appalling (sic). Sally Barker was indeed staring at us from posters within the bar.