We were up and the boat emptied to hand back by 09:00. The deisel tank was refilled and we had used £68 worth during our 14 days cruising. Before I took them to Glasgow airport, the Australians were charged £148 for their ten day use – that’s the difference leaving the central heating on all day makes. 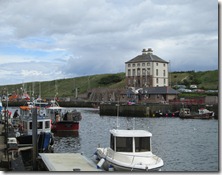 Hartlepool. Brenda wanted to see the coast near Bamburgh castle. After a couple of hours driving we decided that a stretch of legs was required so I turned left and we headed for Eyemouth – signposted off of the A1 as a historic harbour.

What a lovely place for a stop over. In the harbour, alongside the fleet of fishing boats, there were a collection of seals hanging

around. One big bull seal was very close into the harbour wall adjacent to a trailer selling fish to feed him with. A child was bought some chunks of Mackeral and she fed the seal using a pole with a line and clip on the end. This is a beautiful location with a museum and other tourist attractions. We then took a walk around and bought some lunch items from the Co-op before continuing our journey south. 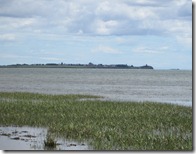 to Lindisfarne. The tide was well in so there was no possibility of going to visit, but we went as close as we could before turning around and heading back onto the A1. Next we passed Bamburgh castle but it was not this Brenda wanted to visit. Having seen some pictures of the 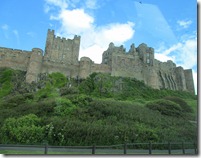 beautiful beaches along this coastline she just wanted to sit in the sun with her feet in the sand. Even though it was quite windy, we spent about half an hour just watching 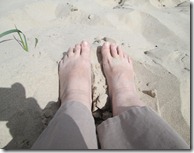 beach users and enjoying the sunshine whilst sitting in a sheltered spot.

Then on to Hartlepool viat the Tyne tunnel for our overnight stop in the Grand Hotel. Once checked in and showered, we decided to go for a wander around the Marina. Our route took us past the Station where we happened 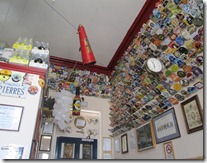 across ‘The Rat Race’. This is a micro-pub housed in the old taxi office. It’s so small that it doesn’t have a bar. You take a seat and are served by the owner from a cupboard in the corner that housed 4 handpumps, lots of cider boxes and bottles of Belgian Ale. What a lovely place. The picture shows a selection of the pumpclips that have been saved for display on the walls and ceiling. We left in search of food, vowing to return but time was against us and they were closed by the time we had finally managed to eat.

After breakfast, we went to the car park to find our car was covered in seagull droppings. Thanks Hartlepool. I cleared off the windows as best I could and we set

off towards home. A nice easy run found us on the A38 about lunchtime so we stopped at Branston waterpark and enjoyed our lunch sat in the sunshine watching the ducks, geese and occaisional narrowboat passing down the Trent and Mersey canal on the otherside of the lake. Back home before 3pm and Brenda had two batches of washing out drying on the line before 6pm.