With Buckby and Braunston flights to do Graham was very happy. As we left 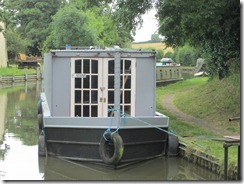 Weedon we spotted this unusual craft, a home made hull housing a full shipping container. Not a lot of ventilation or windows fitted yet but it appeared to be work in progress. I bet it’s fun at some of the bridge-holes.

We arrived at Buckby bottom lock just as a pair of boats was entering. Another couple then came down and as we 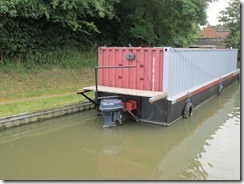 prepared to enter the empty lock a boat appeared in the distance so we sat and waited. Another couple of boats were waiting to come down so we asked them to wait a while. Then the approaching boat tied onto the lock landing and announced they only wanted the chandlery. We set of up the flight on our own. Luckily there were plenty of boats coming down the flight and so we didn’t need to turn many locks.

After Scotland, seeing this number of boats on the move is novel. We even met six coming the other way through Braunston tunnel fortunately without hitting any of them. There were a couple of on-coming boats who made that very difficult; their headlights were obviously a trillion candle power and aimed straight ahead so all vision in the gloom was lost for a few minutes once they had passed. Quote of the day from G – “ when you are eating custard whilst steering through a dark tunnel it’s best to use the right side of the spoon”

Braunston flight was not just busy – it was busy with hirers getting used to their new craft. It was also windy and a couple of pounds were lacking in water. As we were leaving the Admirable Nelson lock, we came across much bobbing about in the 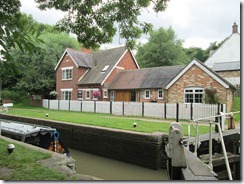 breeze with one in-experienced skipper hard aground on the offside and all his crew waiting at the lockside for him to arrive. Everything he tried seemed to make matters worse. We said we would take a rope and try and pull him backwards off the mud but the stern just dug in deeper. Another hire boater then came up offered to take a bow rope and pull him off the mud right into the lock. It looked to have been a success as we rounded the bend.

We went through Braunston three times. Firstly, down to the turn where we reversed back onto the mainline and headed south again to the sani-station. A pump-out, water fill and dumping the emergency ‘bucket and chuckit’ contents were required. Once all that was done it was down to the marina entrance to turn again. As we passed a couple of moored boats for the third time in an hour they wondered if we were watching them.

After a quick visit to Midland Chandlers for some self adhesive foam rubber strip, for the bottom of the cratch, it was then out into the countryside of the North Oxford canal to find a peaceful mooring for the night. Happily, once tied up, dinner was served as a beef curry had been in the slow-cooker all day.