We thought it was brightening up 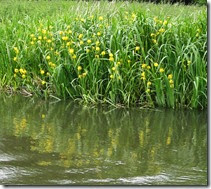 Only 25 shades of grey today. Intermittent drizzle just to ensure that the river flow stays fast and the weirs remain furious. We set off after hearing tales of boat eating trees  and fierce flows sending craft to all the bad places told 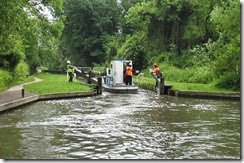 to us by an adjacent moorer who was heading down towards County lock – Good luck!.  I’d forgotten how idiosyncratic the K&A locks are but nothing upset Jannock’s equilibrium. Having completed a total of eight today we’ve seen no evidence that the top gates always swing open on the K&A so the lass yesterday must just be too lazy to close them up. I do not appreciate inconsiderate boaters like her. (This statement has the possibility of stirring up a hornet’s nest ;^)

At Burghfield lock there were some CaRT/Land and Water workers upgrading the towpath.  As we were working through a couple of them came to do the top gates for us. It seemed that they were about to go down through the lock once we’d finished coming up.

We spent most of our cruising sharing with a young man named Owen aboard nb Goosemoor.  At 21 he’d spent the last eight months on a 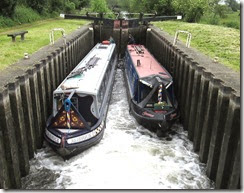 rented narrowboat going about the system to see if he’d like it. Gap boating? We suspect he’s been caught by the canal virus. He’s having to return the boat to it’s owner, with some regret, as she’s put it up for sale. He’ll be back. He’s become very skilled in his travels. Since he was single handed and we had fridge contents to clear up we invited him to join us for our late lunch. A hot meal, enough stewed blackberries to stave off scurvy for a twelve month and the last of our coconut ice cream inside him he went on his way. We wish him luck, another lovely young man, one of the ones who rarely get noticed, they are out there!

Graham went off to fetch the car, on the DiBlasi, in yet another variety of drizzle, damp grey on the colour chart. The rain got heavier the further North he went and so created a new record for how wet he’s got on a car shuffle so far.