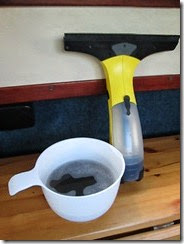 at sparrow-o’clock (that’s 9ish on a summer Sunday morning) to do a car shuffle with Graham, what could I usefully do for an hour. I love my new toy! I’d treated myself to a Karcher window vac. I clean windows and however I do it and with whatever I use they always look worse when I’ve finished than before. Jannock has 12 windows and they have secondary double glazing. They were so mucky. Some warm water, a blob of eco-detergent and my window vac and all 36 surfaces are gleaming. Just look at the colour of the water when I’d finished. It’s my best new toy. And all that industriousness done to the sound of church bells, a wonderful sound. 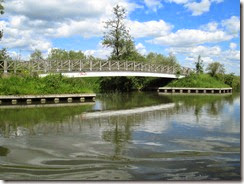 We shared most of the days locks with a chap and his two visitors on his 30’ Sea Otter. He was giving them chapter and verse on what to do and how to do it such that I thought he was a RYA instructor. As the day went on it became clear that he was actually quite a newbie boater; actions speak louder than words.

At Day’s lock, I had to take action. I thought that the last goose in the flock looked a bit odd. As we got closer it was clearly a spaniel chasing the geese with just her head above the water. The frantic owners were calling and calling but the daft dog’s instinct was stronger. The geese were moving into the weir stream which was running fast and it was clear that the dog was getting tired by still it pursued them. 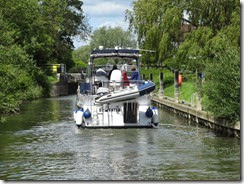 I turned Jannock into the weir stream to get nearer to the dog and Graham tried calling it from the front deck and got it’s attention for a millisecond, long enough for the geese to move away. I manoeuvred between the dog and the weir and the geese moved behind Jannock. The dog was confused because it did not recognise Graham who was calling it’s name and then noticed it’s owners calling it from the opposite bank. Brenda then used Jannock to heard the tired dog back across the Thames to it’s owners. We weren’t sure of the chances of a tired spaniel surviving the weir so were happy when the owners finally hauled it out of the river onto the bank.

We weren’t sure of the chances of a group of canoeists near Cholsey. hey were spread across the river and kept crossing in front of our bows with little regard to us bearing down on them. In the end, having just managed to miss one pair, Brenda gave a loud blast on the klaxon which focused their thoughts on safety. 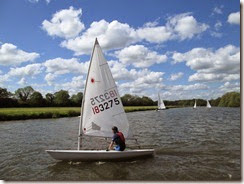 Goring sailing and rowing club had their safety boat out along a course, marked by buoys, that their sailors were using to good effect in a stiff wind. “Slow down and follow me” was the instruction we were given but he then positioned himself, and his little boat, 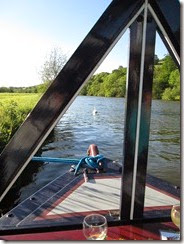 right in front of Jannock so that I couldn’t see him. If I turned to see him along one side he would move back in front. We finally cleared the course safely just in time to see one chap clear our stern and then promptly capsize during a tack.

We finally moored up at Lower Basildon as the mooring at Goring were full-up. This worked out better as we had a lovely evening sat out on the bows in the sunshine taking our dinner in a most glorious location.