Ian and Brian chose NOT to do any fishing.

We visited a pub.

The weather was wonderful.

We were on the road at 2pm and arrived at Jannock for 3. Once everything was 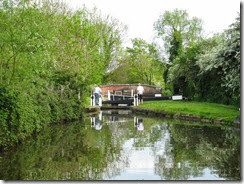 offloaded from the car and stowed, albeit temporarily in some cases, we set off North towards Thrupp which is the first place we can turn round to head South again. For this cruise, Brian and Ian have decided not to bring their fishing kit as they want to do the upper Thames. Although you can fish on the canals all year, it’s currently closed  season on the river so – No Fishing ;^)

We worked up through the two locks, past Kidlington and up into Thrupp. My crew abandoned ship as they both wanted to work the liftbridge and left me on my own to pass through it, wind in the wide area beyond (without hitting anything, including the sides) and pass back through heading South again. Down we went through the same two locks to moor up not 20ft from where we had started. That meant I could hop in the car and go to collect fish and chips for our dinner from Smarts in Kidlington. Three pieces of fish and a large chips meant they cost a lot less than individual portions and we still had too many chips.

We then carried on down through the next lock and Dukes Cut out onto the River Thames where we moored for the night on the offside. Let the Soddit commence and we managed 4 games before retiring to bed at midnight. A little earlier than usual but we had started earlier as well. 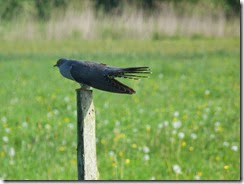 This morning we awoke to bright sunshine accompanied by the call of the cuckoo. We noticed that it was sat atop a fence post not more than 50 ft from the boat. Both Ian and I took pictures but his SLR got a much better picture of it than my ‘point and shoot’ camera did. We set off at about 10am and made our way past Eynsham with no hassle and very little movement of other boats. The weather was glorious and it was shorts all round with the 30 factor sun protection being applied by all, not usual for a Soddit cruise. On through Pinkhill lock and past The Ferry Inn which was very busy. Along this stretch there are a few shacks that look like short term holiday homes between the larger properties on the offside bank. At one of them a group of men were sat on the bank fishing 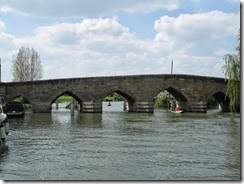 which created bad feeling from my crew who’d left all their tackle at home. We moored for lunch just after the sharp Z bend prior to Northmoor and were considering moving onto the bank to eat but there were cows in the field so we stayed on the foredeck.

After lunch we continued on up through Northmoor lock and past the Rose Revived which was doing a roaring trade of lunches as well as the boat hire business being busy. There were electric punts and peddalos everywhere and none of the occupants were worried about a large lump of steel bearing down on them. Having finally cleared the melee’ we continued up through Shifford lock and into the tree lined twisty bit. It is really secluded and peaceful along here and 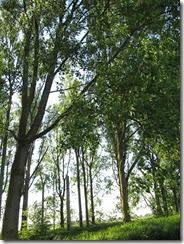 so we decided that we’d try and moor for the night just before Shifford lock cut having turned round. As we approached Tadpole bridge Ian suggested we stop and go for a beer at the Trout Inn as it’s one of the pubs that sells Vale beer – as if we didn’t already have enough on board ;^)

I was at the tiller as we passed through Tadpole bridge as I decided to wind above and return back through to moor up as there was one space just big enough on the end of the mooring. No chance! The current was flowing fast and Jannock’s engine just could not force the boat broadside against it, so we returned back through the bridge in reverse and slipped into the mooring facing upstream. Even this was not straightforward as I tried to turn there first and failed with that as well. After a pint in the pub, we turned Jannock by pushing the bows out into the flow whilst holding the back rope on the mooring. She turned beautifully and so we set off downstream to find a mooring on the meadow above Shifford lock cut. Ian cooked a chicken stirfry using a lot fewer pans than he usually does. We then got another 6 games of Soddit played before dragging ourselves to bed. 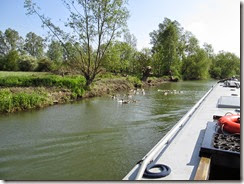 Another very peaceful night and a glorious sunny morning to wake up to. Back down through Shifford lock where the lock keeper took Ian to see the grass snakes in the compost heap – unfortunately it was still a bit chilly in the shade and so they’d all moved well into the heap for warmth. The Rose Revived was still closed as we passed and none of the day hire boats were out. We continued on as the sun got warmer and managed to share a lock with a cruiser and three touring canoes. The lads in the canoes were travelling all the way from Letchlade to 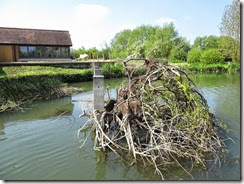 Wapping in a week. I hope the weather holds for them. On our way through Newbridge yesterday, we noticed a large item of flotsam wedge above the bridge. On the way down I got this picture of it. We were making good time going with the flow of the river and my crew wanted to see Farmoor reservoir, where our local water supply comes from, so we pulled onto the 24hr moorings and they went for a walk whilst I started my lunch preparations. Down through Eynsham lock and everything was 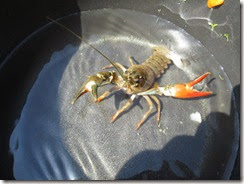 almost ready so we moored in a field to eat it. The water alongside Jannock’s bows was lovely and clear so we decided to see if we could attract any thing in the water by disposing of the spare veg and pork chop bones. No sooner done than the first crayfish appeared – it happens so quickly that I managed to catch it using the saucepan that had held the veg that I was getting rid of. The photo is proof that it is possible to catch a crayfish using a saucepan. Back down the river after lunch was over to enter Dukes Cut again. This time there was a boat in front of us and we had join a three boat queue for Dukes lock on the Oxford.

We had a great weekend and the weather was terrific.