Fishing matches – it must be closed season.

Flora of the day – Kingcups.

An early start from home saw us un-pegged and moving off at 09:30, 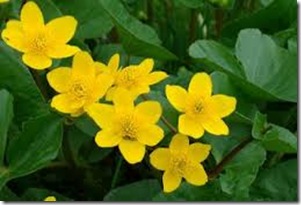 just as a fishing competition was setting up on the banks either side of Stoke Hammond bridge. Before we’d reached Stoke Hammond lock we passed STEAM nb Hasty heading south so we looked forward to a lock in our favour. The bottom gates were leaking so badly that the level within the lock had dropped by about a foot by the time we arrived. We came across the next fishing match, much bigger this time, by Willow Tree marina. They seemed a cheerful bunch who requested that we stay straight down the middle of the cut so as to not disturb their chosen offside swim. One fisherperson stood out from the rest, he looked severely handicapped with a distorted upper torso – however as we passed we discovered that he was in fact the “ hunch-fisherman of Nokia”. 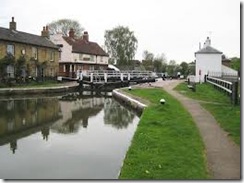 On through Fenny lock and then into the Milton Keynes marina shuffle – one going in, one coming out whilst we and another passed the entrance going in opposite directions. We’ve been at Fradley when we’ve had three boats moving about in different directions but this was a first for us – four boats all moving different ways at the same time. The sun has been hiding behind high clouds all day leaving us at the mercy of the biting cold wind.

At Linford wharf we narrowly missed a boat coming south through the bridgehole. Once through he started to wind at the wharf. Meanwhile, once we were through the bridge we happened across yet another boat reversing towards us. They then proceeded to wind just north of the bridge, much to the disgust of a southbound boat who had to try and stay put in the high winds whilst this happened. In the meantime the boat we had narrowly missed then appeared back through the bridgehole to find his way blocked by the turning boat. Brenda and I were glad that we had cleared that one before it started.

We continued on against an ever more cold headwind until we stopped and moored up on a 14 day mooring until next weekend. We can have up to five days boating over the bank holiday weekend as I’ve taken a couple of days holiday.