A bit late starting this year due to carp weather and incapacitated crew due to a medical hoperation – how-ever while the crew is still recovering I persuaded Ian and Brian that a Soddit cruise was in order. Only problem was we needed to go North and Jannock was still pointing South.

No worries, we left Bourne End at 09:40 and headed down to Winkwell windy-hole. At lock 60 Ian found a little frog clinging to the lock wall about half a metre down from the top and so he rescued it and set it free into the hedgerow. Both Brian and Ian had one go each at operating Winkwell swingbridge – their first hydraulic experience. As Jannock left the bottom lock there was another boat waiting to ascend and so we shared the return passage through the lock with it. He was stopping at the boatyard above which was quite good considering the amount of smoke his engine was emitting. There is no way I fancied sharing all the way up to Berko with that one. By 11:15 we were passing Jannock’s mooring again and on our way North. 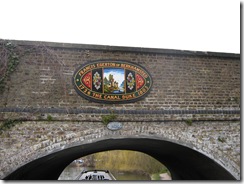 A new badge has appeared on the bridge north of Ravens Lane lock.  I’d decided to stop at Waitrose in Berko to get some rolls for Sunday breakfast so we decided that this would be a lunch stop as well. By the time the lunch and maggot drowning session was coming to an end the heavens opened and so we sat tight and played four games of Soddit waiting for the rain to stop. Once the 4th game was over we noticed that it appeared to have stopped raining and so we set off again. At Gas 2 lock it started again and became quite unpleasant. We were just leaving Gas1 lock when Brian’s hand slipped on the windlass and it span off into the canal. I left Ian holding Jannock on a rope above the lock and returned to fish out the missing windlass with the trusty sea searcher magnet – found it first go,  what a result!

Once Brian and I were back on the boat Ian pushed the front out and then walked down the gunnel to the rear – or at least he tried to. He missed his footing and into the canal he went, Brian and I pulled him out onto the back deck and so we decided to moor up for night just above Gas 1 lock and let the rain do it’s worst whilst we played more cards inside. I’d cooked a chicken Jambalaya in the slow cooker which was well received and a further 4 games of Soddit were played.

We were up at 08:00, breakfasted and fished out by 10:00 and so set off in the sunshine towards Cowroast. No more unexpected events occurred today. We passed up through the rest of the Northchurch, Dudswell and Cowroast locks and onto the summit where we spotted two kingfishers. The first was sat on a branch halfway up the bank. Ian got his camera out but was going to miss it as we were moving quite quickly past. I reduced the engine revs and the change in sound prompted the little devil to take flight before a picture could be taken. The next was seen flying along in front of us so Ian moved to the front deck with his camera but alas, all he got a picture of was a pigeon that flew down to the water for a drink. Once we were clear of the main cutting we stopped for lunch. The sun was bright and we could hear the wind in the trees above us but our little sheltered spot was glorious. I managed to remove the evidence of winter from the whole of the starboard side because the canal water was quite clear here.

We flew down Marsworth flight amidst hundreds of gongoozelers with the assistance of two CaRT volunteer lockies. As we passed under Red Lion bridge I became quite concerned as there was a giant showman's engine going over the bridge at the same time and I could not help thinking “what will happen if it’s too heavy for the bridge”. It appeared that there had been a small steam rally at the Red Lion with real as well as model engines in attendance. They were just packing up so we didn’t manage to stop and visit. We continued on to a suitable 14 day mooring and then I returned to Bourne End on the Di Blasi to fetch the car for the journey home whilst Ian and Brian tidied up the boat.