The weather had cleared up so off we went. As we were leaving we met the same lady boater we had spoken to yesterday afternoon. She said that the pound where we were moored, between locks 5 and 6, had been emptied overnight which explains why Brenda thought that her vertigo had returned during her early morning visit to the loo.

We untied and set off into lock 5 where we were stopped by a volunteer lockie due to a lack of water in several pounds ahead. It would appear that something was partially jamming the towpath side ground paddle on lock 5 as well as problems with the ground paddle at lock 4. 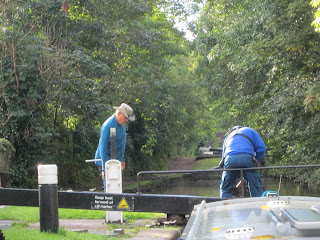 He produced a drag fork and started trying to extract the obstruction from the paddle whilst Graham assisted by winding the paddle up and down as instructed. Finally the paddle would drop right down and so he must have moved it although we were not sure what it was. Meanwhile, the top gate would not fully open so while the lockie was notifying the rest of the team of his success, Graham used the drag fork to clear stones from behind the gate to enable it to open fully. 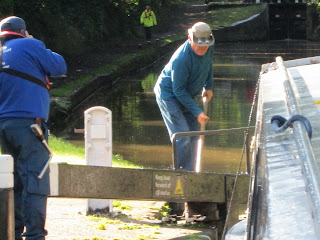 Finally, after a wait of 50 minutes, we were allowed to  continue our way up towards the top of the flight. Once again, volunteers had saved the day. Unfortunately Graham then found that Jannock’s lock wheeling bike had a front puncture so he had to abandon it in the front well and set all the locks on foot.

Out of the top lock we set off towards Nuneaton and the North Oxford canal. Although we mostly had bright sunshine it was interrupted occasionally by heavy showers. As we passed through Bedworth, we stopped for a very brief chat with our friends Terry and Christine although we didn’t leave Jannock as they were self isolating.

At Sutton’s, Graham performed the best turn he’s ever made around that junction without the use of reverse and straight into the open lock. It is possible when there are no other boats creating obstructions and no observers sat outside the pub watching. Practice (and favourable conditions) make perfect it would appear. 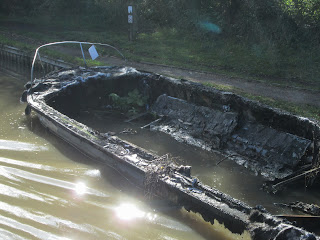 On past Aldermans Green where Graham was amused by the CaRT overstay notice flapping in the wind whilst attached to a burnt out shell of a boat. Obviously they have to follow their procedures  but it just seems silly. On through Ansty and Stretton Stop to Brinklow marina where we turned and moored on the service area to offload stuff into the car. We were rewarded that evening by a wonderful Brinklow sunset. 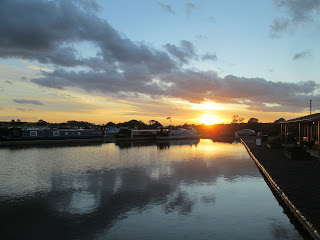