How to hospitalise crew.

We (Ian, Brian and myself) arrived at Jannock at approx. 8pm, via the 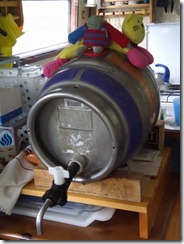 excellent fish and chip shop at Berkhamstead station, ready for another Soddit cruise. The weekend weather looks excellent, so we loaded everything on board, tapped the pin of XT3, which Cat and Monkey were very fond of,  and let the Soddit cruise begin. Unusually Ian immediately caught a couple of nice fish before it got dark and the serious card playing started. We managed to play 5 games of Soddit before retiring to our beds at 01:30 tomorrow ;^)

Sausage sarnies for breakfast followed by fishing. Lots of fish caught by Ian but only two little tiddlers for Brian. Whilst I was preparing Jannock for the off, someone ascended through lock 59 and so we immediately set off at about 10pm. Brian had asked to go through Uxbridge this weekend but as we were doing an ‘out and back’ starting from our 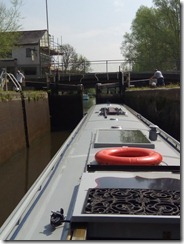 home mooring North of Hemel I could only see us getting as far as Watford before we needed to turn around.

We passed down past Winkwell, Hemel and Oxley and then moored for lunch under the trees just above Nash Mills lock. After we had eaten and the guys had experienced a fruitless fishing session we continued on down another 8 locks before winding and mooring for the night in the wide at Grove Wharf, just below Lady Capels Lock. My plan was to do a BBQ evening meal as the weather was so good but it would appear that the stock of charcoal had suffered and no matter what I tried, I could 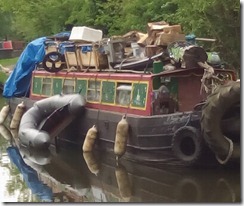 not get it to light. I wonder where Jannock’s stock of easy light charcoal went to? The evening meal was eventually served having been cooked in the oven and under the grill. Another five games of Soddit finished the evening with Ian and Brian being declared joint winners for the weekend (only by half of one point). We were safely tucked up in our beds by midnight as the beer had run out. A nice quiet mooring spot here once all the Emergency Service sirens had given up for the evening.

Bacon sarnies and a bit of fishing for breakfast before setting off back towards Bourne End. We passed up through nine locks before mooring for lunch at Apsley. There was one gap in the moored boats on the opposite side to Sainsburys and I believed Jannock would fit. Sure enough, I got her in there without touching another boat and we only had about inches spare at each end. My crew, and the crew of one of the moored boats, were impressed. After some lunch, shopping and fishing, we set off again, sharing the first lock with the boat that had been moored immediately in front of us. They were stopping to take on water above the lock and so we continued on alone. on up through the Apsley and Boxmoor locks until we got to Fishery Lock. All the time we had been ascending locks on our own, Ian and Brian had got into a routing of emptying the lock using both lower gate paddles. When empty Ian would close his paddle and climb across the gate to Brian’s side and then they would push the single gate open to allow Jannock to enter. At Fishery Lock Brian, who was pushing on the end of the balance beam, missed his footing due to the top step being there and fell 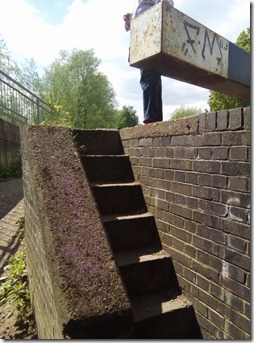 down onto the towpath bouncing off of the stair wall as he did so. Ian immediately rushed to his aid whilst I secured Jannock, half in and half out of the lock, and then climbed up the lock gate to help. Brian was un-conscious as he had landed on his head and so Ian called 999 whilst I fetched a towel from the boat to try and stem the bleeding from his head wound. The first people along were an off-duty fireman and his wife out for a stroll. He started trying to find out what was wrong with Brian by asking all the right questions once he had regained consciousness. The next couple along were an off-duty paramedic out walking with his partner and so he took over until the ambulance arrived. When making the 999 call the call centre needed a postcode and so Ian ran into the Fisheries Inn and got theirs from the bar staff. The ambulance arrived and so we thanked the paramedic and let the professionals take over. As they were getting him sorted the boat we had shared with earlier arrived to ascend the lock and so I took Jannock up through the lock with them. Once through the lock I tied up and helped the ambulance crew get the loaded stretcher up the steps to the road. I sent Ian with the ambulance and I took Jannock back through the last four locks to the mooring with the kind help of our lunchtime mooring neighbours. I regret not remembering their boat name as I would like to thank them. I know it was a private boat whose name was a combination of his and hers and they moor at Wigrams Turn marine. Once back at the mooring I tidied up all our stuff, packed it into the car and set off to Watford General Hospital in the car. Brian needed five stitches to his head wound and he had cracked/broken six ribs. We stayed at Watford until 10:30pm when the medical team announced that he would be staying in overnight. He was eventually let home on Wednesday once he could cough without convulsing. Brian regretted not having had a drink or two when it happened as it might have taken some of the pain away.

An eventful end to an otherwise good weekend and a timely reminder that even experienced people can make the simplest mistake with drastic consequences.