This morning the Cap’n was up and at-em at 8am. We hope to get through Harecastle tunnel today, but there was a water supply issue which closed the tunnel yesterday afternoon and so we knew it was going to be busy this morning. Hopefully last night’s downpour and today’s forecast rain will help ease the situation.

Twice now we have visited the fabric store in Newcastle-under-Lyme and both times it has rained heavily whilst we were in the shop. Just along from Etruria the site of the old steel mill is now finally being developed with huge steel framed building being constructed. 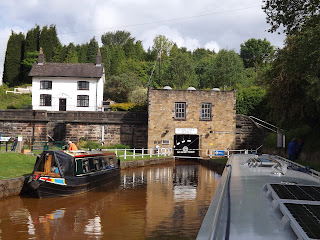 As we approached Harecastle southern portal there were 6 boats on the tunnel moorings awaiting to go through so we had to hold Jannock on the opposite bank until they had gone. Then we moved across and became first in the next queue to go so we would get through today unless there is another stoppage.

The volunteers have been working hard, there are now gardened areas alongside the waiting moorings and new planters outside  the ‘tunnel keepers ut’ Where would we be without volunteers? 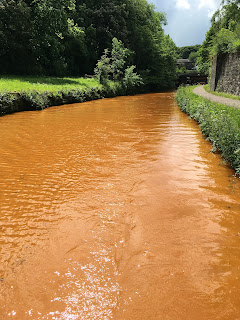 The water is a bit orange here! It leaches through the tunnel walls deep inside the hill. 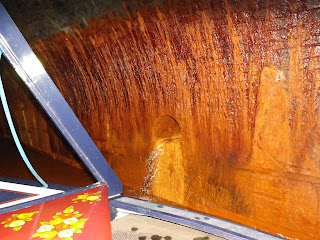 Cap’n had time for his breakfast and a shower before the southbound boats appeared out of the tunnel. We were then first in of a flotilla of three boats. The tunnel wasn’t too wet but it was very cold. Once the doors were shut and the fans switched on we met the bank of fog rushing towards us before the other end was visible again. 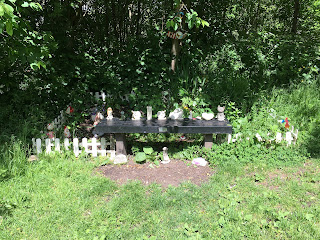 Once out the North end (40 mins transit time) we dropped down through the top lock and then tied up for shopping at Lidl. after lunch, we continued down through 5 more locks to moor for the night at Church Lawton visitor moorings. 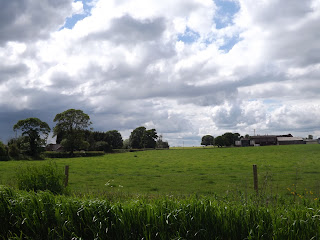 Graham decided to do an experimental car shuffle. Google Maps said that you can get from Church Lawton to Stone by two bus’, changing at Handley bus station so he gave it a go. Not as quick as using the Di Blasi (bus’ get stuck in jams whereas the bike doesn’t) The No3 runs every 30 mins from C L to Handley and then the 101 is every 30 mins from there to Stone. Total shuffle time, due to road works, rush hour and a traffic accident totalled just over 3 hours. He’s done it in just over 2 hours on the Di Blasi.