Cropredy – where we used to moor ages ago.

We cast off at 9:50 and made our way to Grants lock with some sadness that the lock cottage has recently been burnt out.

his boat was jammed in the lock and couldn’t get out.  He pushed and he shoved to no avail so Graham suggested he pull his fenders up – that sorted it!

Onto tramway visitor moorings where we stopped for a provision run to Morrisons. Larder replenished we continued on to Banbury hoping to fill with water below the lock. Another boat was there doing water and elsan so we passed up the lock and filled at the tap in the first basin. Through the liftbridge and into the centre of an enormous building site.

Onto Cropredy, fondly remembered for the first five years we owned Jannock because we moored at 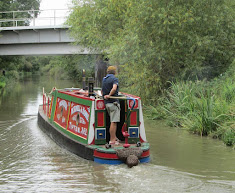 Old Mill. The gates at Slat Mill lock appear to have damaged cills and so the Cropredy pound was over 30cms down in level. This meant keeping to the centre of the channel and passing a fuel boat and other southbound boats very carefully.

Once through Cropredy lock normal water levels were experienced again. We moored for the night at the bottom of
Claydon locks as they are closed overnight until 10am tomorrow due to water shortages. /// nourished.rich.licks

During our evening constitutional we happened across fellow Cutweb members aboard nb Elysium, also waiting for the locks, so we had a socially distanced chat with them for a while.