Birthday of the day – Irina in Spain. 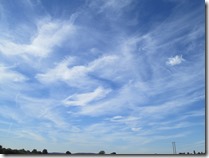 to dump the rubbish and refill the watertank. Graham wasn’t sure what these wispy things were in the sky as we’ve not seen anything like that since we started this trip.

We then set off up Atherstone flight, G riding the trusty lock wheeling bike for the first seven locks as they are quite spaced out. We finished the flight with the aid of 3 CaRT VoLockies at the top lock in exactly two hours. 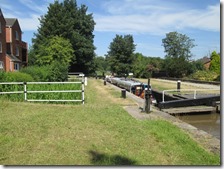 Pleased with that for a boat with 2 crew.

As we passed nb Mr Blue Sky today, we have decided that there are enough boats named after music to create a “Boaters’ collection of music to cruise by” which would have a varied playlist. NOT like Andy Williams’ “Music to watch girls by” – a different cruising!

We notice as we travelled along the Coventry canal that it was obvious, by the little coloured marks on the towpath bank, that CaRT (or their contractors) have been out surveying and identifying faults to fix and offside trees to trim or remove. There has also been much removing of growth either side of bridges for instance to allow the surveying to occur as well. 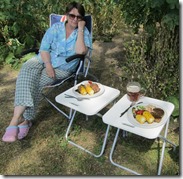 A lot of work already done and a lot more scheduled for the winter no doubt.

We moored near Springwood Haven, under a large shady tree, and ‘shock horror’ – got out a disposable BBQ. We had a lunch of lamb steaks, corn on the cob, roasted peppers and cous cous salad (OK – leftovers). Mango, banana, apricots and jelly for dessert.

A couple of lads came by in an inflatable canoe (LALDLI last week I think). Graham noticed that they only had one oar and 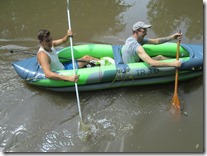 remembered that we still had a wooden one in the engine bay that we found floating in the cut a couple of years ago. They were pleased to be offered it and accepted immediately. Graham noticed that they had an ingenious outboard (see picture) that consisted of a battery powered drill with a long shaft and a computer fan fitted to the end. When demonstrated it seemed to work very well. There are some young engineers out there – off to the pub it would seem.

We continued on after 3:30 and made our way down through Nuneaton and Bedworth before mooring for the night just before Hawksbury Junction. Graham decided it was better to stop before rather than risk going through the lock to find no space available on the moorings after.