Whilst we were walking to the Indigo Lounge last night Brenda got into conversation with an old lady walking along the towpath. She lives in the flats by the canal and walks every day. She told Brenda how she remembered when she was young and her father worked in the coal pit, the nice FMC boatmen would give her a lift 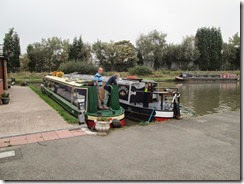 up to the pit to meet him when he finished his shift (only with mums’ permission though). A lady with a very interesting past.

We left Polesworth for the short run to Alvecote where we found nb Just Heaven already in the layby. First job was to get Steve to turn her around so that 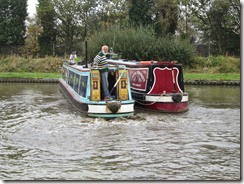 she was stern in to the bank and then Brenda expertly manoeuvred Jannock back in alongside him.

When Brian and Diana arrived on Harnser, we persuaded them to collect nb Black Pig, which was moored on the 48 hour moorings opposite, and bring it into the raft as well. 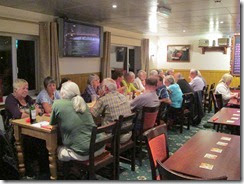 From there on the day continued with general organisational duties and getting more boats into the raft. In the evening we had an informal meal and drinking session in the bar having moved all the tables to form one long one.